Prospective students often ask me how difficult learning the guitar is compared with other instruments. I typically get this question from piano players or folks looking to choose between guitar and piano, so I’ll use the piano as the “orange” and the guitar will be the “apple”.

With the piano, there are 12 keys in a pattern, with that pattern repeating itself several times down the length of the keyboard and no duplicate pitches. Guitar, on the other hand, can have the same pitch in multiple locations. For example, the note for the high “e” string is located in five different places, six on a 24-fret guitar.

In that regard, the guitar seems more difficult, especially for reading sheet music. The guitar is simply a chaotic pallet of frets; there is no method to its madness, no pattern.

What Is The CAGED System?

Enter the CAGED System. Also known as the 5-pattern system, CAGED is simply the chords C, A, G, E, and D.

These five chords are chords every beginner learns right away and the idea behind the CAGED System is that these five basic chord shapes can be repeated all over the neck in order to make any chord in any key.

The diagram above illustrates this point, mapping out the root note, the major third, and the perfect 5th of C; the three notes that make up the C major chord.

This idea can be used for the other four chord shapes in the open position as well. Going beyond these four chords, all twelve major chords will be played in their respective positions along the neck using one of these five chord shapes.

Why Is The CAGED System Important?

The reason the CAGED System matters is that it gives the guitar player a road map to the guitar neck and brings order to the mysterious layout of the fretboard. If a student can learn these five basic major chords, that makes all of the chords more accessible and memorizable.

Rather than attempting to learn, let alone memorize hundreds of chord variations, one only needs to learn a handful of patterns that can be repeated up and down the neck. It really simplifies the learning process.

To illustrate this further, there are 12 regular major chords. “Regular” meaning no extensions (7th, add9, etc.). Given the number of duplicate pitches on a guitar, these chords can be played in up to five different locations on the neck. That’s 60 possible chords, just for the plain ol’ major chord. Add in minor chords, suspended chords, various types of 7ths, and so on, you could easily make a library of 500 chords or more.

CAGED allows the student to learn chords by their patterns and shapes rather than learning chords by their individual key. Making alternate chord voicings or chords with different tensions is simply a matter of adding, subtracting, or moving a note or two in one of those 5 shapes.

Suddenly, the guitar is that much more accessible!

What Is The CAGED System Used For?

The best use of the CAGED System is for those who are seeking to be self-taught. I use this 5-pattern system to teach my students how to be a proper learner of the guitar and how to be their own teacher and grow and develop on their own. Even though my students are not self-taught in the purest sense, my goal of teaching is to teach a guitar player how to feed themselves.

For those who want to bypass the instructor altogether, the CAGED System is an indispensable tool when it comes to learning the fretboard. CAGED is often used to figure out chords or “create” chords without the use of a chord book or lesson video.

A first step in guitar music theory is learning the names of the notes on the 6th, 5th, and 4th strings as these will be the location of the root notes of chords. If one wants to figure out how to play a “B” chord, it is certainly helpful to know where the B notes are, right?

Learning the location of those notes, then learning the five pattern system of CAGED will surely set you up for success. Many music theory ideas are used to teach many different instruments, but when it comes to guitar, resources like the Circle of Fifths can be quite befuddling. CAGED, I believe, is the most important resource for any student or teacher of the guitar.

CAGED is very practical, being useful in “the field”, not just as a theoretical concept. It will give a guitar player more options in the creativity of finding more ways to play a particular chord. Tired of playing E Major the same old way in the open position? Find the root note (E) on the fifth string, make the “A” shape, and see how you like it.

This is very useful when learning songs by ear, or reading a chord chart where you are not sure how to make some of the chords on the chart.

By the way, the chords we are using for this are major in quality, so what do we do about minor chords? Well each of these chords can be converted to a minor and the same idea applies.

For those just getting started with CAGED however, I recommend focusing on only two minor shapes rather than five – the Em and the Am. These are the two dominant shapes when moving minor chords around the neck, typically in barre form. I go into further detail on minor chords here.

Is the CAGED System Good?

Combine your knowledge of root note locations with CAGED, and you will not need an outside source to tell you how to play a chord – ever.

I have been a guitarist for over 25 years. After a quarter of a century, I can tell you that I have never owned a chord book. I do not have hundreds of chords memorized. I never really memorized chords, I memorized patterns.

CAGED is not only good, it is the best way to learn chords on the guitar. The idea that every possible chord is derived from one of these five shapes is huge. I was 19 years old when I learned CAGED. I had been playing guitar for almost 10 years at that point. The CAGED System was one of the breakthroughs in my learning that propelled me from a “weekend warrior” to a full-time professional guitar player. No joke.

How Do You Practice The CAGED System?

Step One – Learn the five chords.

Step two is optional but highly recommended. Learn the notes on the fifth and sixth strings as these will be the primary location of the root notes. The fourth string is a bonus but helps with “D” shaped chords. 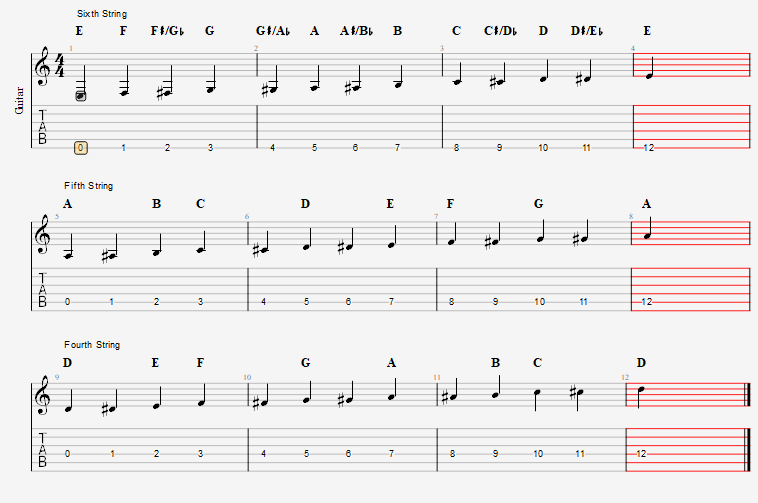 Starting with the C chord, take each of the five chords up the neck using the shape of the others.

Allow yourself to experiment with some of these chord shapes. For example, the “G” shape and “D” shape in the above example are a little awkward. I might alter these a bit to be more comfortable and to provide a little bit of a different sound.

Don’t be afraid to experiment and change things up. This is the beauty of the CAGED System. These are not rules to live by, rather they are parameters; a starting point for your mind to wander and create your own musical voice while learning chords at the same time.

Also, check out our article on 5 CAGED System Exercises To Help You Learn. For the purposes of an introduction, start with these exercises:

In this exercise, the idea is to go back and forth between the open position shape and one of the other four positions. You pick the tempo, you pick the rhythm. Try to create a simple song out of the two chords. This works on your muscle memory and learning to look ahead at the next chord.

As mentioned before, the “G” shape in a position other than open position can feel awkward so feel free to use the inversion “C/E” in place of the full chord shape, or simply omit the note on the high “e” string, using the pinky to play the sixth string bass note.

Continue this exercise up to the E and D shapes and with each of the five open position chords.

So the CAGED system is only five of the possible twelve major chords available, two of which have the last of the natural notes (not sharp or flat) as root notes – The F and the Bb.

There are two common variations of these shapes to make them more guitar-friendly which are the inversions F/C and Bb/F. These shapes are acceptable substitutes for any E-shaped or A-shaped chord. Play around with these chords and try to find the other four shapes.

These are great exercises to start with and they cover a lot of ground. Make sure to play with a metronome whenever you are exercising if you want to accelerate your progress. The purpose of these exercises is for you to work on your mental map of the guitar neck, to think ahead to the next chord, and travel around the neck with efficiency and effortlessness.

It’s important to note that what this introduction to the CAGED System has covered is the basic, 3-note major chord. The major chord is constructed of the first, third, and fifth note of a scale. In C, that means C, E, and G are the notes that are combined to make the C major chord. As you advance with your chord shapes, you can begin to experiment with minor chords, 7ths, suspended chords, and so on.

Hopefully, this serves as a great introduction to the CAGED system for those of you looking to build your chord vocabulary and become self-sufficient guitar students. The 5-pattern system really does unlock a vast array of possibilities for you as a guitar player.

Professional Musician and Instructor. I have been playing guitar for over 25 years with 20 years experience on stage and coaching other musicians.

Although initially intended for beginners, the Fender Duo-Sonic quickly became an underground sensation that paved the way for alternative rock in dingy New York bars in the...

An excellent overdrive tone is the sort of thing guitar players dream about.  Ideally, an overdrive pedal should mimic the sound of a tube amplifier pushed to saturation.  Of course,...

Hi, I'm Luke, and I started learning guitar in 2019 online. I documented all my progress on YouTube and created this website to help others wanting to learn guitar online later in life.
Find out more about me, what gear I use, or just get in contact by clicking on the button below.

This site is owned and operated by Luke Winter. Midlife Guitar is a participant in the Amazon Services LLC Associates Program, an affiliate advertising program designed to provide a means for sites to earn advertising fees by advertising and linking to Amazon.com. We also participate in and receive compensation from additional affiliate programs which we believe can add items of value.