Like it or not, barre chords are part of learning how to play guitar. The good news is, it doesn’t have to be the bane of one’s existence – even if you have small hands!

You see, as a guitar instructor, I’ve come across many excuses from students. Heck, I gave some of these excuses myself when I was a young learner. One of the biggest excuses for not learning guitar – or in some cases not learning certain techniques of guitar playing – is, “My hands are too small!”

Don’t worry – I’m not here to beat anyone about the head for having this excuse because to some, this is a legitimate concern. Although the size of one’s hands is anatomical, it is also in large part relative. And though the hands may play a role in how much easier or difficult it is to play guitar (or piano, cello, marimba, or whatever), there is a solution to every problem; a way around every obstacle.

With barre chords, this is particularly challenging, so I understand the hesitation if your mitts are on the smaller end of the spectrum. But, if you actually have the desire, you can play guitar just as well as anyone no matter what size your hands are.

Can someone with smaller hands learn to play barre chords? Absolutely! I’ll show you how.

Can Your Hands Be Too Small To Play Guitar?

Before getting into barre chords, let’s tackle this question first – can your hands actually be too small to even play the guitar? Well, how small is “too small”? I ask you. Because I have had students as young as 6 years old who made progress and continued on just fine.

So if you are an adult beginner, I won’t even dignify the question with an answer. I will simply smile playfully at you and let you figure out what my answer is to this question. As an adult, even an adult who generally has a smaller frame (or even a drastically smaller frame) than the “average” adult, the chances of you having smaller hands than a six-year-old is pretty small.

This is the point of my argument where you may consent. “Okay, okay”, you say to me. “I can agree that my hands are not ‘too small’ to play the guitar, but they are too small to play well.” Again, I refrain from a direct answer. Allow me instead to point to just a couple of examples.

I hope I have not been unclear.

Why Are Barre Chords So Hard To Play?

The latter statement is defeatist and unhealthy. The former assumes responsibility which empowers one to take full control over his or her own learning experience and puts the destiny in the hands of the one who wields the instrument, even though those hands may be smaller in comparison to another player.

Barre chords seem to get the best of students when they first embark on the journey of learning them. Why is that?

A barre chord is a chord where one finger frets multiple strings. It requires a different set of muscles and more strength. It is also quite difficult to transfer more strength to a single finger while maintaining enough grip on the rest of the fingers that are used to make a given chord.

Further, the barre finger is laying down instead of perched on its tip, but the other fingers are still in their upright positions. One finger is doing something different than the rest. That is not an insignificant detail that can be ignored. This requires “finger independence” which takes a good deal of concentrated and disciplined practice to attain the dexterity to make this happen.

On the acoustic guitar, this is even more difficult than on electric since the strings are thicker, making the tension higher and the strings more difficult to push down. It is actually one of the reasons I urge all who want to learn how to play the guitar to start on acoustic. Moving from acoustic to electric is a cakewalk. Going from electric to acoustic is like going from a tricycle to a Harley.

Barre chords are worth learning, though, because they open up the rest of the neck and allow a player to access more keys and more chords without the need for a capo. The index finger is, as Guthrie Govan said, nature’s capo.

However, the index finger is not always the only barring finger. The ring finger is often used for certain barre chords that are based on the fifth string (first position Bb, fifth position D, etc.). The pinky is also an acceptable barring finger for these chords or for chords that stretch out such as a Major 9 chord based on the sixth string. I will have an example of that below. Without the barre, the unique sounds of this particular chord using this particular voicing are not otherwise achievable.

Below are some excellent tips on How To Make Barre Chords Easier (article with 12 essential tips) that Luke has collected from a huge range of guitar teachers on YouTube so you can benefit from best tips and tricks in improving your barre chords. 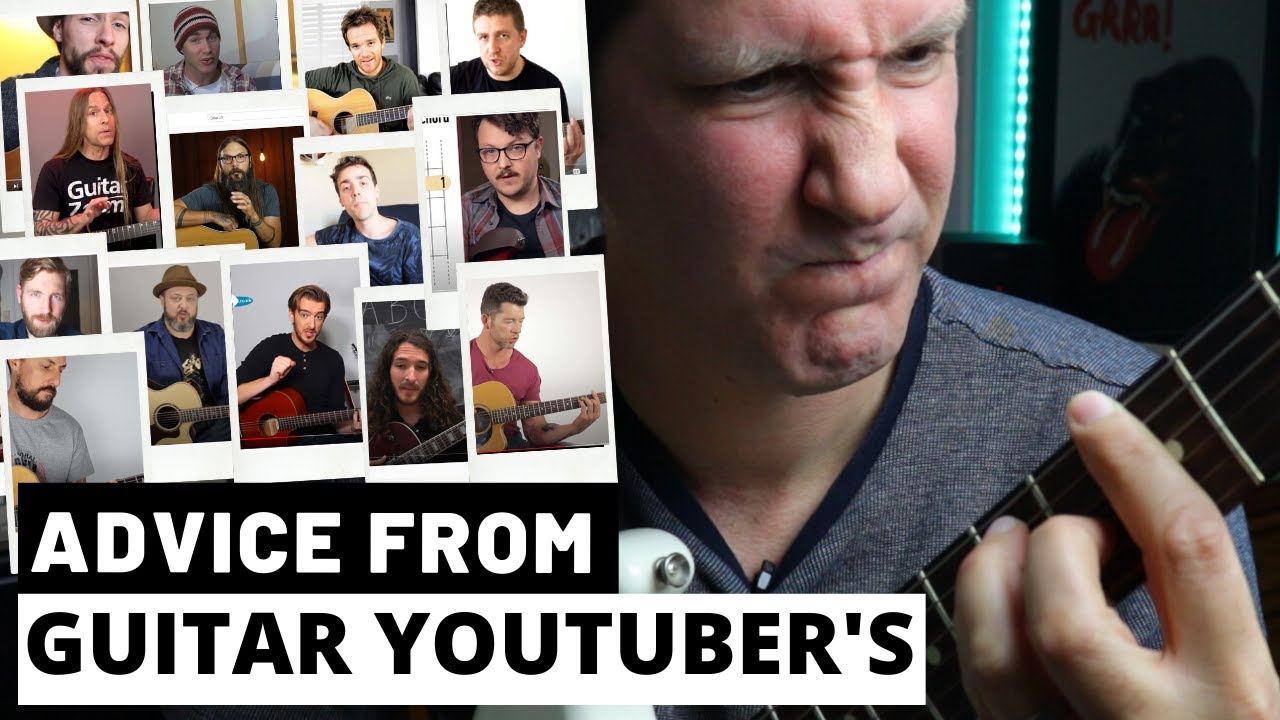 To master a barre chord, it takes practice just like everything else. Practice takes focus and discipline, not simply repetition. One must be fully present and keeping the mind focused on the task at hand. There is a lot of mind-to-muscle and mind-to-ligament connections going on here that require the player’s utmost attention.

Here are a couple of things to pay attention to as you practice playing barre chords, particularly if you have smaller hands.

How You Are Using The Barre finger, Particularly The Index Finger

The way the finger approaches the strings when barring is different than when fretting a single note. The very tip of the finger is being used for the single note, but not for the barre.

A mistake students make early on is to focus their strength and energy toward the fingertip when making a barre chord. It’s not their fault, it’s just how their finger has been trained up to this point. Instead of attacking the string the way you have always done it, try pushing down on the middle knuckle.

This helps the finger to straighten out and be more rigid. The force is more evenly distributed that way rather than being concentrated at the tip which causes muting and buzzing, particularly on the higher strings since there is not much force being applied to that part of the finger.

When performing a barre chord that requires the ring finger such as a first-position Bb, force is applied to the uppermost knuckle that is closer to the tip of the finger. This distributes force to the fingerprint portion of the finger, allowing for the pressure to be applied to the three strings required for the barre. See the exercises below for this chord.

Position of The Thumb And Wrist

Where the thumb is in relation to the other fingers is important. The thumb provides a force that is counter to the fretting fingers which in turn gives them more strength and allows them to clamp down on the strings better. Wherever the thumb is located tends to be where the most grip strength is being applied.

Drop the wrist (which in turn drops the thumb) so that the thumb lines up with the middle of the finger to help in that even distribution of force.

On barre chords that also employ a ring finger barre, moving the thumb inward to be between both the index and ring fingers will help in giving the third finger more gripping strength.

Having a wrist that is dropped helps not only to stretch out fingers, but it helps in making sure the high strings of a barre chord are properly fretted and heard more clearly, so pay attention to the way the wrist is oriented.

Keeping these things in mind will help you make barre chords no matter what size your hands are.

Okay, let’s get to the fun stuff.

If you are just starting to learn barre chords, take it slowly by starting with just two strings.

It doesn’t have to be an F major. If you find this to be difficult at first, just bring this up to a higher set of frets so the frets are closer together and the string tension is not as stiff.

Next, try working a “root 6” or “R6” barre chord, where the root note is based on the sixth string. Start with a power chord and work your way up, making sure every string can be heard before moving up to doing a full, six-string barre.

Again, if this seems to difficult at first, feel free to come up to the fifth or seventh frets to try the A major or the B major instead of G.

Next, try a “root 5” or “R5” chord, again starting with the power chord and progressing to the barre. Start with the minor variation:

Next, try the major variation. Instead of using three fingers for the upper strings, try using the ring finger or the pinky for the barre. In the long run, this will end up being an easier, more efficient way to play these chords. It can also be much easier to use the pinky if you have smaller hands since it won’t be as much of a stretch.

Truth be told, I don’t really like to play barre chords if I can help it. It’s a personal preference, but I prefer the sound of open strings whenever possible. Try this with some of the barre chords. For example, instead of barring, simply leave the high e and b strings open:

For smaller-handed players, these alternate chords can come in handy.

There are also chords that can be completely transformed from a barre chord to a more interesting chord, such as the G#m:

Hi, I’m Luke and I am the founder of Midlife Guitar. This blog and my YouTube channel are dedicated to helping those learning to play guitar. To learn more and get in contact, please click the button below.

This site is owned and operated by Luke Winter. Midlife Guitar is a participant in the Amazon Services LLC Associates Program, an affiliate advertising program designed to provide a means for sites to earn advertising fees by advertising and linking to Amazon.com.  We also participate in and receive compensation from additional affiliate programs which we believe can add items of value.